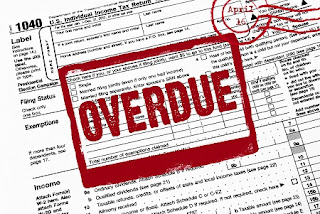 There is a subtle hint in one of the recent press releases from the IRS which might be of interest to people
who are seriously delinquent in filing their federal tax returns.

In a news release about the People First Initiative,  the Internal Revenue Service announced a sweeping series of steps to assist taxpayers by providing a temporary break from a variety of enforcement activity. During this period, to the maximum extent possible, the IRS will avoid in-person contacts. However, the IRS will continue to take steps where necessary to protect the government’s interests.

In the middle of the four page announcement, the IRS says:

Non-Filers –The IRS reminds people who have not filed their return for tax years before 2019 that they should file their delinquent returns. More than 1 million households that haven't filed tax returns during the last three years are actually owed refunds; they still have time to claim these refunds. Many should consider contacting a tax professional to consider various available options since the time to receive such refunds is limited by statute. Once delinquent returns have been filed, taxpayers with a tax liability should consider taking the opportunity to resolve any outstanding liabilities by entering into an Installment Agreement or an Offer in Compromise with the IRS to obtain a "Fresh Start." See IRS.gov for further information.


Wait! What?! Yes, the IRS still has tax compliance in mind. The IRS is reaching out to everyone with a reminder to file their tax returns and to use this period of eased enforcement as an opportunity to come current.

In the March 25, 2020, People First Initiative press release is this startling statement:

During this period, the IRS will generally not start new field, office and correspondence examinations. We will continue to work refund claims where possible, without in-person contact.

The Fresh Start Initiative referenced in the March 25 news release is nothing new. Nine years ago in IR-2011-20 , the IRS trumpeted a “New Effort to Help Struggling Taxpayers Get a Fresh Start.” That initiative in 2011, introduced a number of new measures which provided for increasing the dollar threshold when liens are generally issued resulting in fewer tax liens, making it easier for taxpayers to obtain lien withdrawals after paying a tax bill, withdrawing liens in most cases where a taxpayer enters into a Direct Debit Installment Agreement, and creating easier access to Installment Agreements for more struggling small businesses. It also expanded a streamlined Offer in Compromise program to cover more taxpayers.

The former Commissioner was reported as saying “[w]e are making fundamental changes to our lien system and other collection tools that will help taxpayers and give them a fresh start.”

For those delinquent filers who are reading this blog, the “subtle hint” referred to above should be clear: join the ranks of compliant Americans who dutifully file and pay their taxes each year as the IRS isn’t forgetting about the non-compliant.

Could things go a lot better for you if you do it now as opposed to waiting to see what will happen?

Here are some facts:


Generally compliant American taxpayers might be surprised to learn that a large number of taxpayers:


Be reminded that the IRS eventually catches up with a large number of these non-compliant taxpayers and it always costs a lot more than if they had just filed timely and correctly to begin with. In my many years of experience working both in the IRS and in private practice, I have found that for the taxpayers with delinquencies, most are in a state of constant low level anxiety and fear about their years of neglecting their taxes. They wonder when the IRS will show-up. While most people never see a Special Agent, the IRS is good at rooting out the non-compliant taxpayer. They don’t catch up with everyone, but they do catch up with many eventually. Skirting the tax system is a gamble that is simply not worth it.

Despite the pandemic, the likely economic downturn, and the permanent change in the way Americans live their lives, there are still people who go to bed at night thinking about the fact that they haven’t filed tax returns in five or ten years.

These people now see the government handing out Economic Impact Payments, but the real issue here is not whether you are going to get $1,200 within the next few weeks but whether this might be a chance to reset your relationship with the IRS.

In our practice over the years, one of the most common situations on which we are asked to help is where a non-filer comes to us and wants to come clean. They have no idea whether their past delinquencies are serious enough to cause an IRS audit of past years, or worse, launch a criminal investigation if it ever finds out a taxpayer’s past.

Why file delinquent returns now during the extreme emergency?

It is a good question to ask why now? To some, they look out and see chaos in government and a serious impending economic decline. Some have even predicted social unrest during the next 18 months and the potential for violence.

Here are a number of reasons why people who are seriously delinquent with the IRS should think seriously about acting now while the IRS is temporarily distracted:


Clearly it remains in the best interests of the non-filer or delinquent taxpayers to move promptly to correct their tax delinquencies.

Here is what needs to be done. The delinquent taxpayer needs to contact an experienced tax attorney, not just a qualified CPA, to disclose everything relevant about their filing history or lack thereof.

A tax attorney needs to determine whether the threshold for a criminal inquiry exists before returns are filed.  In most cases, taxpayers have an outsized fear about what the government is likely to do to them.

A qualified tax attorney will need to consider each legal issue, for example, whether a transaction should have been reported as ordinary income as opposed to capital gain, whether there exists a proper method of accounting, or depreciation, or whether an amount is even reportable as income, and whether related corporations and partnerships are also delinquent in their filings.

One of the issues will be how many years will you have to go back to file? After the review, the tax attorney and client must find a capable CPA or other qualified return preparer and work closely with them with guidance on how to prepare the delinquent returns. In some cases, the attorney might have to engage the preparer in a confidential arrangement to preserve the attorney/client privilege throughout the process.

One big issue is whether the Voluntary Disclosure Program should be considered as the mechanism for a taxpayer to come back into filing compliance. A voluntary disclosure in accord with longstanding IRS policy may be appropriate in some egregious cases to minimize the chance of criminal investigation.

For the non-filer or delinquent taxpayer, now is not the time to think that the IRS and the rest of the law enforcement community have gone away and will never come back. We will survive this awful pandemic and there will be a new paradigm in place. The smart move is to get ready now before it becomes too late.