How You Could Increase Your Chance Of An Audit When You File This Year's New Form 8938, Statement of Foreign Assets


There is a new wrinkle this year on required disclosure of foreign assets.
The general rule used to be that “taxable events” during the past year determined what had to be reported on an annual tax return. For example if you sold an asset or received a dividend or other distribution from that asset you would be required to report that taxable event on a tax return.  Now, at least with respect to foreign assets, the requirement is to TELL THE IRS WHAT YOU HAVE, regardless of a taxable event. 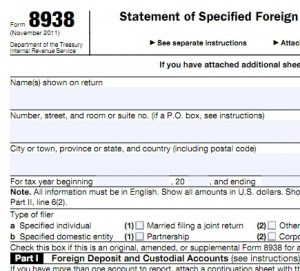 The government opened this door with the requirement to file FBARs which were required since the 1970’s but not enforced until around 2004.  The FBAR (or form TD F 90-22.1) requires filers to simply report the existence of an interest in a foreign financial institution regardless of whether there was a taxable event during the reporting year. For example, even if a foreign bank account earned no interest that year, the very existence of the foreign bank account was required to be disclosed.  FATCA has expanded the definition of what must be disclosed with the requirement to file new form 8938. The real question now is, what is there that doesn’t have to be reported to the government apart from personal effects or a personal residence?  The answer is “nothing.” Everything must be reported if the dollar threshold is met unless it is a personal residence in the taxpayer’s own name, or personal effects such as jewelry.
The reason for this change, in part, is the fact that FBARs are not required to be attached to your tax returns and in fact are filed with a government data center which is miles away from any nearby IRS service center where tax returns are normally filed.  Even though FBARs are mailed to a data center under the overall control of the United States Treasury Department, an IRS agent auditing a return of an American ex pat would have to separately request a taxpayer’s FBAR from the FBAR data center to complete an audit. This made it a hassle for agents to complete their audit on one case and move on to the next, so Congress made it easier for the IRS as part of FATCA to require the filing of TWO foreign asset reports.  One is for foreign bank accounts (FBARs or TD F90.22.1) which is still required, but now, filers must attach new form 8938: Statement of Specified Foreign Financial Assets to their annual tax returns.  Assuming a taxpayer files his tax return on time on April 15,  new form 8938 requires the taxpayer to “tell all” once, and then again on June 30, the due date for filing FBARs, at least for all of the taxpayer’s foreign bank accounts.
New form 8938 is deceptively simply but contains some traps for the unwary. In part I regarding foreign bank accounts, the filer must check a box and disclose whether the account was opened or closed during the tax year.  If the “opened” box is not checked, an examining agent would readily conclude that the filer has had this account since before 2011.  Similarly,  In Part II where every other foreign investment or other property is required to be shown,  if the form is  properly filled out, the taxpayer is required in effect, to make a statement  as to whether the  asset was owned prior to 2011.
The IRS likes to think it operates efficiently. That means they like to pick returns for audit which are likely to disclose abuses of the law as opposed to conducting audits which produce a “no change” or relatively small adjustments. While it is true that most agents are just as happy to close a case with no change as opposed to one with a lot of adjustments, IRS management wants to use their agents effectively and that means spending their scarce resources where they get their best bang for the buck.
It is not hard to connect the dots here. A truthful filing of form 8938 essentially opens the door for an agent to ask, “you didn’t indicate on your form 8938 that this bank account or this partnership interest was closed or acquired during 2011. How long have you had it and where did the money come from to acquire it?
The point here is very simple. The IRS has gotten pretty good at matching data from other sources and previously filed returns.  Filers should make sure that the information submitted on current forms is not only accurate but consistent with other or previous filings.